This is the first story in a five-part series on Native American gangs.

MINNEAPOLIS — It was Sunday, game day, and James Cross turned down the television volume, rose from his armchair and lifted his purple Vikings windbreaker to show off his tattoos.

“This is a drive-by scene,” he said as he pointed to the image on his stomach. “I never finished it, though. I was going to put ‘Do another drive-by to make another mother cry.’”

He turned around and pulled the purple windbreaker up to show off his shoulders.

“I got forks on the back, which represents the Disciples,” said Cross, referring to a tattoo of two hands making the sign of the Latin Gangster Disciples. “Then I’ve got tattoos on my face. I had a teardrop, but we covered it up with a feather just so everybody wouldn’t be intimidated and I could get a job. Everybody knows a teardrop is for murder.”

When they were around the age of 7, he and his twin brother first hooked up with the Latin Gangster Disciples. One day, he said, they were hanging around with the older guys and someone said, “Hey, go get that cash register,’’ referring to a nearby convenience store.

“We went and got that cash register,’’ Cross said. “There was an old man working there, couldn’t do nothing, couldn’t hardly move, so it was an easy hit.’’

Not that easy. They got caught and he began a long string of encounters with the law. Now 48, he has spent almost half his life in prison. That time has taken a very serious toll on his life. 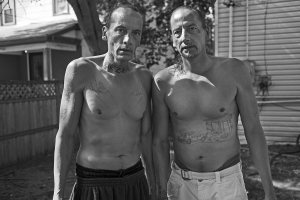